From People of Colonial Albany
Jump to navigation Jump to search

Albany was one of the twelve original counties of colonial New York[1] as established by Governor Thomas Dongan in 1683. This page provides basic definitions and access to Albany's essential parts and historical narratives. Please understand that the core of our concern is the people of the city of Albany as distinct from its hinterland.

By definition, Albany County initially was to "containe the Towns of Albany, the Collony Renslaerwyck, Schonecteda, and all the villages, neighborhoods, and Christian Plantacons on the east side of Hudson River from Roelof Jansen's Creeke, and on the west side from Sawyer's Creeke to the Sarraghtoga." In time, its boundary lines would become more closely defined! 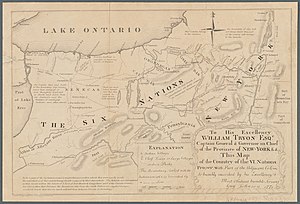 Guy Johnson map, 1771 — This map conveys a sense of the huge geographical area of Albany County at its largest - from New England to the Indian Country and from Kingston to Canada! At that time, Albany County had a population of 42,706 - giving it almost twice as many settlers as any other New York county. On the eve of the American Revolution, New York perhaps was the seventh most populated North American colony with 168,007 European and African ancestry settlers. By the time of the first Federal Census in 1790, it had jumped to fifth in the United States with 340,120 people.

But practically speaking, until the late 1760s, most people thought of Albany County as the entire upriver region of the province. Any more precise definition of its boundaries was the subject of much discussion, uncertainty, and controversy involving Yankees and Yorkers, the French, other European settlers, and Native peoples - original settlers of the entire region. However, Albany's expansive and amorphous nature is portrayed graphically on a number of contemporary maps - particularly those representing the region in 1771 and 1776.

For the entire colonial period, the Hudson River was the defining and unifying physical feature of the region. The objective of virtually all trade and travel was to reach and/or use the Hudson[2].

Albany County was composed of a number of political subdivisions. Located on a map of the province dated 1776, they included the City of Albany, the Manor of Rensselaerswyck (later split into Watervliet (then Colonie), Bethlehem, the hilltowns, and the East Manor), the town or borough of Schenectady, the village of Kinderhook, Schaghticoke, Livingston Manor, Saratoga, Hoosick, Great Imboght, Catskill and Coxsackie, Schoharie, Claverack, King's District, German Camp, and Cambridge.

Halfmoon was an informal entity from the early eighteenth century and erected as a town in 1788. Lansingburgh or "the New City" was known separately from the 1770s.

In the decade prior to the Revolution, three new counties [ named Tryon (Mohawk basin and Adirondacks), Charlotte (Adirondacks and Lake Champlain), and Gloucester (much of the Hampshire Grants - today's Vermont) ] were taken off and established from the newly settled lands in the western and northern parts of original Albany County. However, the latter two especially, were sparsely settled until after the war - even though relatives and associates of important Albany personages held title to much of the best acreage[3].

Even so, in 1774, Albany County was the most populated county in colonial New York with 42,706 settlers. In 1790, the count had reached 75,921 inhabitants and it still was the most populated county in what now was New York State[4]. By 1800, Albany County had achieved its present boundaries as Rensselaer, Saratoga, Schenectady, Schoharie, Greene, and Columbia Counties had been split off from it. Albany County was now confined to the west side of the Hudson River and south of the Mohawk. Consequently, its population had dipped to 25,155 people!

For most of the colonial period, the city and county of Albany sent two and then three delegates to the Provincial Assembly. Rensselaerswyck and later Schenectady (beginning in 1726) also were allowed one delegate each. From its earliest days, the Albany County militia was composed of residents of the county's communities and was organized by locale.

The Colonial Albany Social History Project is focused on the people who founded and built the CITY of Albany during its formative years. However, we understand that the city story cannot be separated from that of its hinterland! This page will provide access to information and issues relating to the people of colonial Albany and, where necessary and feasible, including the larger county set in the surrounding countryside.