From People of Colonial Albany
Jump to navigation Jump to search 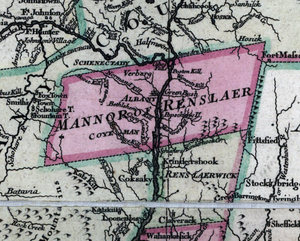 Often called the Sauthier Map, its official title is "A Map of the Province of New York, Reduced from the large Drawing of that Province, compiled from Actual Surveys by Order of His Excellency William Tryon Esq. Captain General & Governor of the same, By Claude Joseph Sauthier, to which is added New Jersey, from the Topographical Observations of C. J. Sauthier & B. Ratzer." Engraved by William Faden and published in London in 1776. The image map shown above represents old Albany County and is taken from a larger and more expansive print. Inexpensive copies of this colorful representation are widely available!

Taking into account numerous spelling and variations[1] of address, the term "Rensselaerswyck" identifies the large tract of land first granted to Killiaen Van Rensselaer in 1629 and "owned" by his descendants for more than the next two hundred years.

Although its exact boundaries defied definition, it included all the land that surrounded the city of Albany. In fact, Beverwyck and then Albany encompassed land (a one-by-sixteen mile tract by its charter definition[2][3]) that had been carved out of the manor - very much against the wishes of the Van Rensselaers.

Killiaen Van Rensselaer took step to establish a plantation or "patroonship" in the upper Hudson Valley as an efficient way to cultivate the land and mine the wilderness for farm and forest products that could be exported to Europe and sold. Before his death in 1643, the "first Patroon" engaged hundreds of talented and willing settlers from across Europe[4] and sent them to Rensselaerswyck to be his tenants. These American pioneers were primarily farmers but also were artisans, tradesmen, and others who could support what became the most successful settlement initiative of the New Netherland era.

Initially, most of Van Rensselaer's tenants settled within a few miles of Fort Orange. Some of these tenants did practice agriculture and husbandry as specified in the terms of their contracts. But, in general, any effort to make the plantation profitable for the Patroon was compromised by the widespread interest in trading for furs - initially an irresistible avenue to riches for many living in the region.

On Killiaen Van Rensselaer's death in 1643, management of the American estate passed to through two generations of his descendants to Killiaen Van Rensselaer. In 1704 "the Lower Manor" (Greenbush[5] and Claverack) was detached and placed under the direction of Killiaen's brother, Hendrick Van Rensselaer - a one-time Albany city father. This partition made the northern part of the estate (Rensselaerswyck) even more important to the history of the city of Albany.

In 1685, royal governor Thomas Dongan had issued a patent for the "Manor of Rensselaerswyck" - establishing the patroonship as a legal entity, describing its borders[6], and defining the special rights of its proprietor. The patent also specifically excluded ". . . fort Albany and the Towne Albany" from the manor - setting the stage for Dongan's granting of the Albany city charter in July 1686. 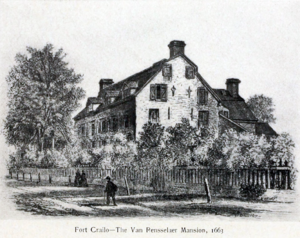 In 1704, the Van Rensselaers partitioned the manor into two parts with the "lower manor" called Claverack going to Albany trader Hendrick Van Rensselaer who built Crailo and, in 1740, passed the estate on to his son, John Van Rensselaer.

Although a part of Albany County, from 1691 to 1775 Rensselaerswyck sent its own representative to the provincial Assembly. After the War for Independence, that seat was enveloped in Albany County. In March 1779, the new State legislature enacted legislation dividing the Manor into East and West districts[7]. In 1788, Watervliet was made a separate district. In 1793, Bethlehem was made a town within Albany County. The manor on the east side of the Hudson (known as Greenbush) became part of newly created Rensselaer County in 1791.

On the death of his father in 1747, Stephen Van Rensselaer II became Patroon at age 5. During his short tenure, he expanded the tenant base and made a number of improvements on the property. On his death in 1769, the estate passed to his son, five-year-old Stephen III, and was administered by kinsman Abraham Ten Broeck until the young Patroon came of age in 1784. By that time, the manor was the most populated entity within Albany County.

The population continued to grow as what became Watervliet and then Bethlehem filled up with new tenants and other residents over the next their years. As Stephen Van Rensselaer III became more and more prominent and occupied on different stages, the day-to-day operations of the manor were more administered by the Patroon's agents. The three decade career of Robert Dunbar, Jr., as the Patroon's Agent, is the most notable of these stewardships. Technically, the manor ceased to exist following the death of Stephen Van Rensselaer III in 1839. However, the Van Rensselaer family continued to live at the Manor House, the focal point of manor activity, for many years.

Technically, everyone living within the boundaries of the Manor was a Van Rensselaer tenant. However, there seemed to be many exceptions as a number of large farms including Schuyler Flats may have paid no r als. The first tenants were engaged by proprietor Killian Van Rensselaer and sent to America. Those pioneer New Netherland Dutch came from across Europe and have been profiled in The Van Rensselaer Bowier Manuscripts[8]. They constituted a major population source for the city of Albany. The manor grew slowly over the next century as subsequent proprietors attracted new tenants from those already in America.

Map surveyed by John R. Bleecker in 1767. Numbered houses are referenced by a printed key. Engraving included in Documentary History, 3:916-17

The number of leases increased dramatically after the end of the Seven Years War as Stephen II and his successor, administrator and Van Rensselaer son-in-law Abraham Ten Broeck, became much more active in utilizing the potential of the land. New tenants of the third quarter of the eighteenth century primarily were recently arrived Europeans (many of German background) and some New Englanders. The map drawn by Albany surveyor John R. Bleecker in 1767 locates many of those landholders. After 1784, Stephen III continued to engage tenants with many of the surviving leases dating from his tenure. These tenants included some Europeans and old Albany people. But they were primarily young Yankees who had spread west out of New England!

The earliest surviving census of the Manor was made in 1697[9]. A list of freeholders provides eighty-one names of men in the "colony" of Rensselaerwsyck in 1720 and likewise in 1742 . The Watervliet portion of the census of 1790 is available on this website.